I had decided to pass on the Tunisian dinner at Vignola featuring the handcrafted products from the Mahjoub family's organic farm in Tunisia's Mejerda Vally.  As fate would have it I stopped by after rescuing my wife from a check engine light. After Jen Bonaccorsi, of the Rogers Collection graciously offered me a bite of the first course of roast lamb sausage I decided to come back for the closed party for food industry workers later in the evening. Really good sausage, really good decision! 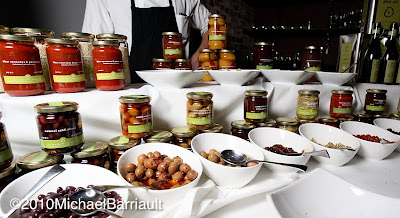 The farm and the El-Mahrine olive groves have been in the family since the 1930's and today they are recognized in the culinary world as one of the premier producers of olive oil, table olives, and condiments. Besides the Meski and Sahli olives the line includes both H'rouss & Harissa, a North African pepper based condiment that releases the flavors in food and can be used much the same way we would use salt.  Other condiments and spreads use garlic, sweet peppers, sun-dried tomatoes and artichoke, some in combination with Harissa. 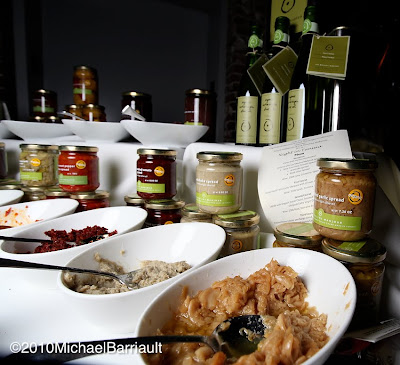 They also make chutney, marmalades and jams using the sun baked fruit from this Mediterranean countryside. I tried both the grapefruit and lemon marmalades and have found a new favorites late night topping to put on my toasted bread and butter. The Rogers Collection has been bringing the Les Moulins Mahjoub line to American shores since 1996 and it is now available in several stores in the Portland area including Rosemont Market (more on them later) the Cheese Iron, Whole Foods and I think one or two more. Oh yeah they offer couscous and pasta sauces and M'Hamsa ( sun dried wheat grains) couscous, hand rolled in the original large grain method. 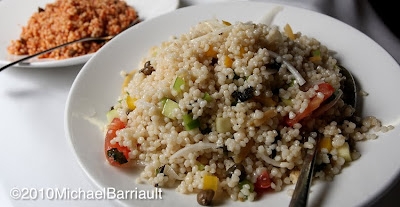 The dinner was accompanied by wines from RP Imports, one of which I especially liked was the Mount Nelson, 2009 Sauvignon Blanc, from New Zealand. Big nose, very refreshing, perfect for my daily lunch of tomatoes, cukes, a slice of feta swimming in olive oil and a ciabatta roll. 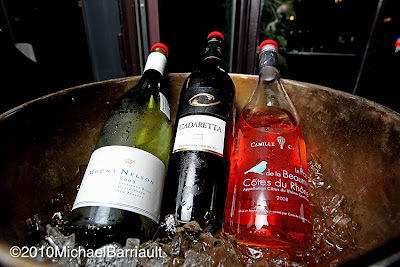 Now about Rosemont Market's new store. I had noticed the sign across the front door of the old Rosemont Pharmacy announcing it's coming some time ago, 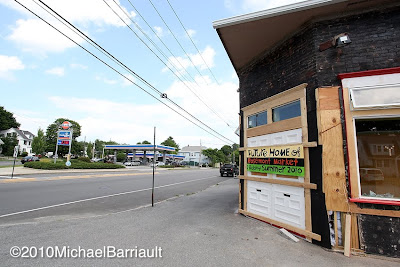 but hadn't gotten around to talking to John Naylor, the owner, about it till this week. I had several questions. 1) Why the new store? "originally we were looking for a bigger bakery... but decided it was smarter to move the retail store."
2) What happens to the original store at Rosemont?  " it becomes the bakery...  allows us to catch up with demand... and it's undecided as to wether we do retail sales or use it only as a production space."
3) Will the new store be different from the current store in it's offerings?  " yes, it will have a cut butchery and a fresh fish case featuring Harbor Fish products.
4) When will it open? "sometime in late July or August." 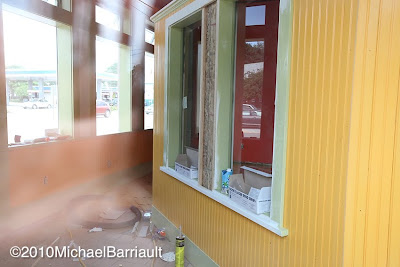 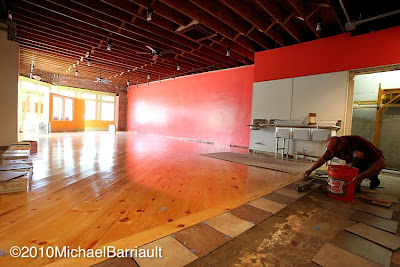 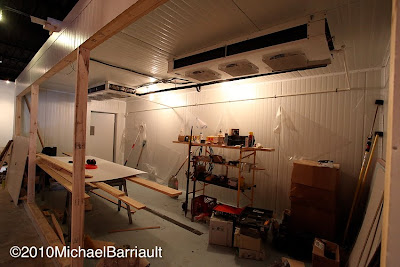 This is the walk in cooler waiting for the doors.
The new store is a couple hundred feet and on the opposite side of Brighton Ave from the front door of the old store.
The work is being done by R. Connolly & Co. The new wood floor mirrors the original footprint of the pharmacy, while the tile work covers the later cement slab addition. The red pine is covered with 4 coats of a tung oil based product that will have the floor looking antique in six months. 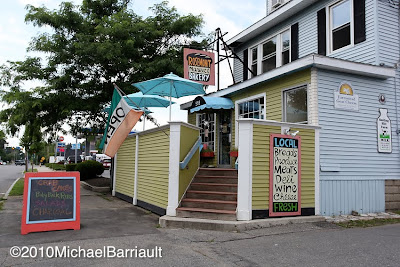 Now about the newest Masa Miyake opening, Pai Men Miyake, a noodle bar at the former Local 188 location on Longfellow Square.  Opening depends on how fast the work progresses, late fall is hoped for. If you remember the lay out of Local 188 you can see the change in footprint from these pictures of the rough inside. Ductwork is in place and the workers were busy finishing electrical when I was there on wednesday. If the new Pai Men develops as good of a reputation as his Spring Street Miyake it will be a very popular in this very visible location. 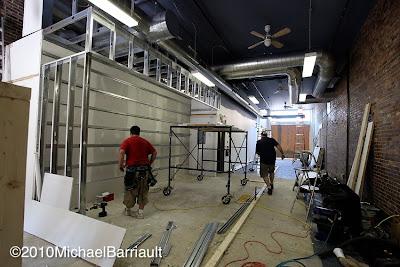 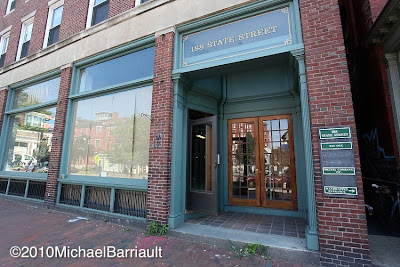