Recently a charming little book came to my attention, Portland Then & Now.  Published by Arcadia Publishers and authored by local John Moon. Pairing old photographs of 19th century Portland with contemporary images by the author it reminds us of both recent history and forgotten spaces.  The book will be in stores Monday, August 3rd and the author will be at Nonesuch Books, August 26 and Borders, September 19th to sign your copies.  I've chosen three of the old images for todays post.

The first is an 1879 view of Market Square which shows Portland's old market house.  Constructed in 1825 it was modified in 1832 into Portland's first city hall, by Charles Quincy Clapp.  Torn down in 1888 it made room for the Soldiers and Sailors Monument in 1891, in todays Monument Square. 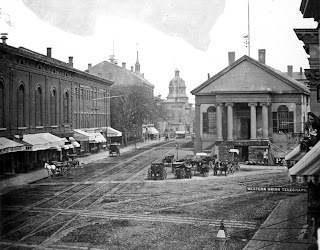 The 2nd image is of the old Falmouth Hotel which symbolized Portland's rebirth from the fire of 1866.  Erected in 1867 & 1868, by John Bundy Brown, the six story  240 guest room Falmouth featured a dining room, a billiard room and 10 stores at the corner of Middle & Union streets.  Torn down in 1964 today it is  the site of the  Key Bank Plaza. 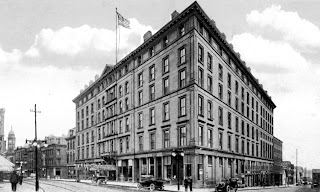 The 3rd image is of Baxter Boulevard.  Envisioned in the 1890s, by Mayor James P. Baxter, it stands today as one of Portland's defining features, connecting Forest and Washington Avenues, snaking 2 1/4 miles around Back Bay.  It summons citizens from not only Portland but surrounding communities into a ribbon of life 24 hours a day, 365 days a year, as they walk, run, ski, picnic, and watch the 4th of July fireworks  around it's edges. 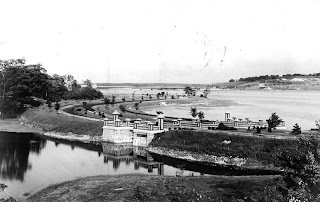 For anyone interested in Portland and its history this book would fit nicely on your shelf.

Arcadia Publishing ( 888-313-2665) is the leading publisher of local and regional history in the United States.   www.arcadiapublishing.com 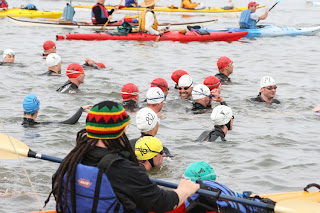 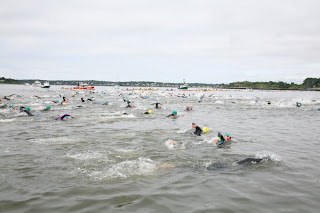 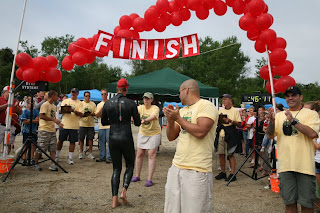 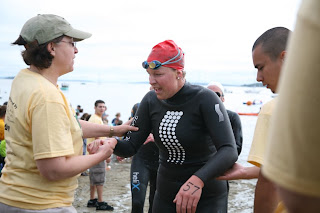 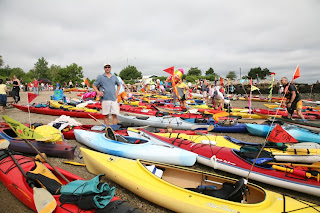 More then 250 swimmers took part in Saturdays Peaks to Portland swim. The Greater Portland YMCA event is in it's 28th Annual year.  The 2.4 mile swim from Peaks Island to the East End Beach provides an opportunity for swimmers to challenge their physical and mental abilities, while at the same time raising money for the Cumberland County YMCA’s Annual Support Campaign, providing needed scholarships for youth, adults and families. Last year we gave out over $322,000 in financial assistance and we expect to give out even more this year. Each swimmer is escorted by a partner in a Kayak helping to keep the swimmers safe and adding to the color and confusion at the start.  A large crowd is on hand at the dock on Peaks Island and along the East End Beach finnish line.  This years event was won by fellow students from the Middlebury College swim team,  Nick Daly from Cape Elizabeth and Sarah Demers from Florida.
Posted by DoDa! at 12:58 PM No comments: 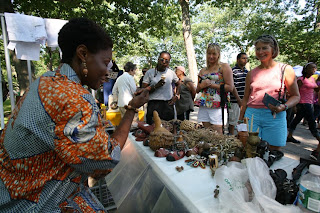 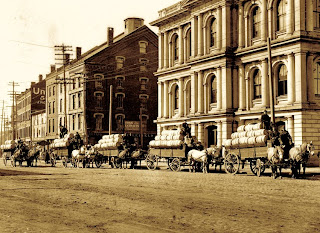 I've been out of town for a week and unable to post, but now I'm back and will be posting a couple of items starting sunday.  The first is Festival of Nations, a celebration of Portland's ethnic diversity held in Deering Oaks Park.
The 2nd is a preview of a new photo book about "Portland,  Then & Now" published by Arcadia Publishing.  In it Portland native and photographer, John Moon,  juxtaposes 19th century photographs with his own current day images of the city.  The image seen here, Commercial Street and the Custom House, (around 1890),  is courtesy of the Maine Historic Preservation Commission. The book will be in stores on Monday, August 3rd and the author is scheduled for two book signings in the area on 8.26 & 9.16.  I'll have a full post with more pictures late next week.
Posted by DoDa! at 12:56 PM No comments:

It's Never To Early to Think Ahead... 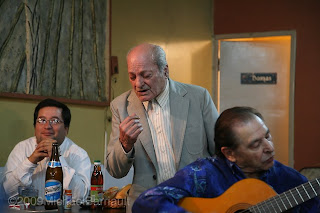 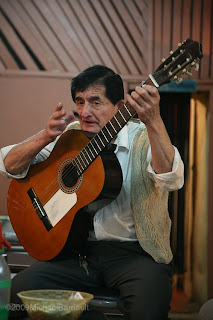 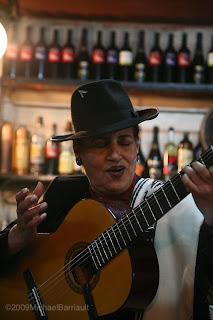 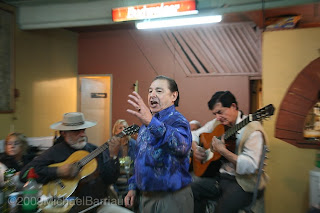 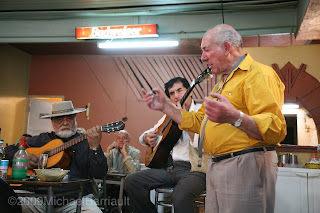 so if your looking for someplace warm to get away this (winter), google Buenos Aires.  I (we) spent 2 great weeks there in April.  The street music is hot, the food was fantastic, the weather was great, bright and sunny but not to warm.  We stayed in a 4 room private apartment in Monserat, in the 200 block of Defensa.  The famous sunday flea market that runs 12 blocks thru Plaza Dorrego, ( think Tango) started outside our front door.  But todays post is about what we did on our 2nd sunday. And that was the Feria de Mataderos, or "Cowboy Fair".  The fair runs sundays from fall to spring celebrating the life of the Argentina Gouchos with traditional music and dancing and well as crafts and food.  At one point having split up from my wife I was looking for a glass of wine  and stepped into a somewhat seedy cantina.  What I found turned out to be the highlight of my trip.  These two old guys and their buddies playing, no passionately acting out there music, taking turns singing, playing guitars, as people came and went thru-out the afternoon and into the evening.  I don't speak or understand a word of spanish but it didn't matter.   If you go try www.vayama.com for flights and google something like Buenos Aires short term rentals and you should find plenty of apartments to choose from, in all price  ranges.  I mentioned the street music before and should note two bands we saw playing on the street, Pollera Pantalon (google em) and El Metodo, they have changed out the bongos, in there videos, for an electric piano and are much the better for it. The accordion player is great.  http://www.purevolume.com/elmetodotangojazz
Posted by DoDa! at 12:41 AM No comments:

Antiques in the Gardens 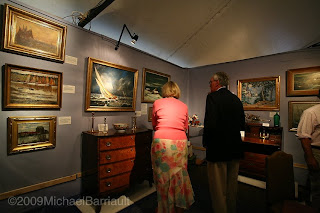 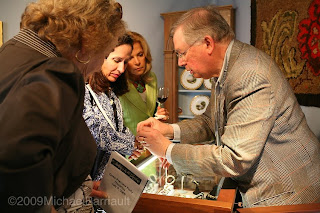 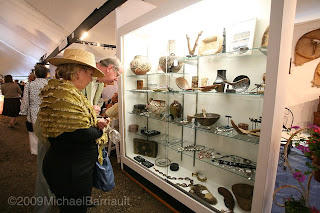 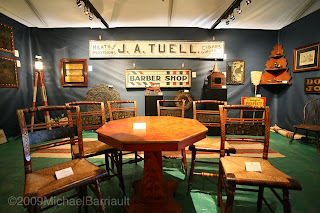 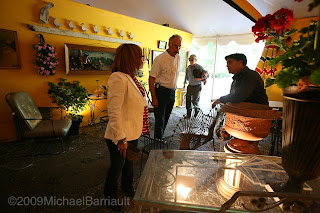 This is my first post away from the immediate Portland area...  in Boothbay Harbor.  An antiques event hosted at the Coastal Maine Botanical Gardens.
The "Antiques in the Gardens" three day show opened with a Gala Party on thursday evening, under three tents, which turned out to be equal parts food, fun & commerce. Forty dealers from eight states were on hand as well as numerous restaurants, wineries, specialty food merchants and a vodka maker. You can see more of the festivities here.  I'll blog about the Botanical gardens later in the summer, for now their site is : www.MaineGardens.org
Posted by DoDa! at 3:26 PM No comments: