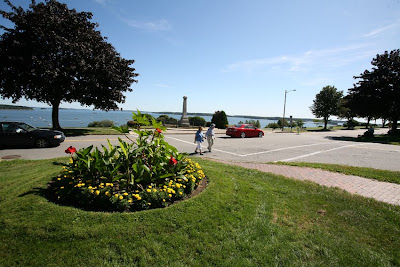 Where it all begins!
This is the 1st in a series of posts, "Congress Street" which will take a look at Portland's longest street. Starting on the Eastern Prom overlooking the waters of Casco Bay, it travels along the spine of the peninsula before dipping down passed the ever growing Maine Medical Center complex and running onto the mainland proper where it heads out Rte 22 towards Gorham and Buxton. This nearly five mile route is a mini tour of Portland itself starting at
Casco bay it passes thru both residential and downtown areas of the city, Monument, Congress, Longfellow & Bramhall Squares, the Museum, some of th
e cities best restaurants, two fire stations, a hospital, numerous churchses,  three graveyards, two bus, a train station and the airport. 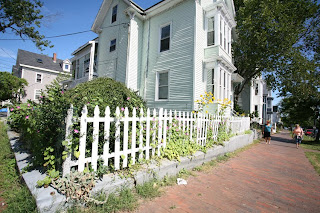 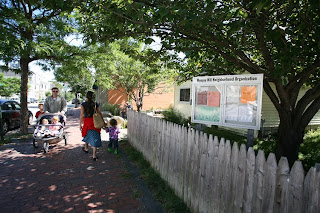 Rising from the prom Congress Street maintains a residential flavor crossing ten streets and reaches North Street at its highest point. A small arts district has sprung up around the arts center with several quiet restaurants and an upscale market. 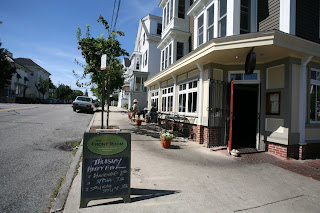 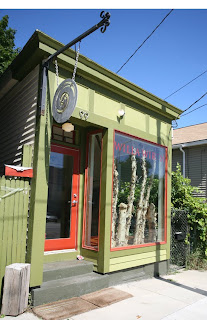 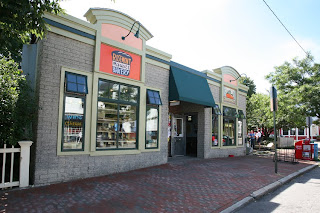 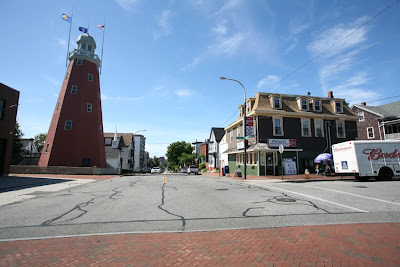 North Street runs to the western edge of the hill and overlooks the newly resurgent Bayside, Interstate 295 and Back Bay itself and beyond to the neighborhoods of mainland Portland laid out in an arch from North to South. The intersection of North and Congress Streets houses the Munjoy Hill fire station and the old Observatory, now a tourist attraction, but once used to follow the comings and goings of a busy commercial port filled with clipper ships, bringing goods from across the seas. From here Congress Street looks down the Hill to Washington Ave, India Street and the Old Italian neighborhood before crossing Franklin Street Arterial. 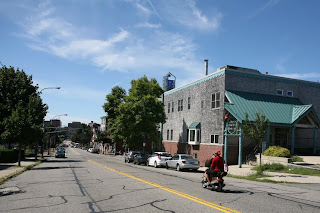 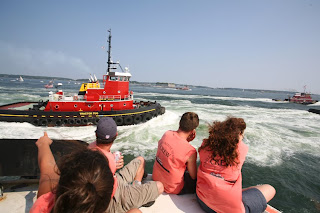 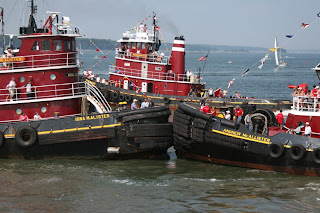 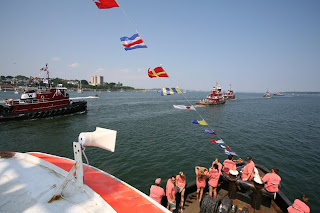 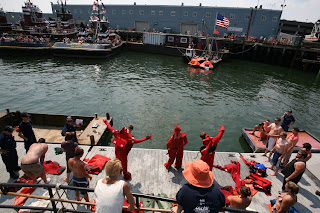 Portland Harbor and the inner Casco Bay was hopping this weekend with the MS HarborFest. Over 800 volunteers and participants were out on the water on Friday and Saturday taking advantage of some incredible weather. Activities got underway on Thursday evening with an benefit auction at The Woodlands Club, followed on Friday by a Skippers reception for the sailing crowd at Handy Boat, in Falmouth. Saturday hosted the powerboat Poker Run and sailing regatta. Sunday the tugs topped the waves and made some of their own, but not before some hardy souls jumped into the bay for the "survival suit races."

ABOUT THE MAINE CHAPTER OF THE NATIONAL MULTIPLE SCLEROSIS SOCIETY

The Maine Chapter of the National MS Society, operating from offices in Falmouth and the Bangor area, with strong volunteer support throughout the state, serves approximately 3,000 families living with MS in Maine. Nearly one in every 400 Maine residents has been diagnosed with MS, a prevalence rate 70% higher than the nation as a whole. The Chapter offers information and education, financial assistance, care management and peer and group support. Volunteers are an integral part of the work we do, helping with our special events, programs and services as well as with our office functions. For more information about the Chapter please call 1-800- FIGHT MS (1-800-344-4867) or visit our website www.msmaine.org

Multiple sclerosis interrupts the flow of information between the brain and the body and stops people from moving. Every hour in the United States, someone is newly diagnosed with MS, an unpredictable, often disabling disease of the central nervous system. Symptoms range from numbness and tingling to blindness and paralysis. The progress, severity and specific symptoms of MS in any one person cannot yet be predicted, but advances in research and treatment are moving us closer to a world free of MS. Most people with MS are diagnosed between the ages of 20 and 50, with more than twice as many women as men being diagnosed with the disease. MS affects more than 400,000 people in the U.S. and 2.5 million worldwide.

Thanks Go To: "The overall title sponsor of the Harborfest weekend is Portland-based law firm Verrill Dana LLP, which has been sponsoring this event for the last six years," says Mary Jalbert, chair of the board of trustees of the Maine Chapter of the National MS Society. "Bangor Savings Bank has also signed on as event sponsor for two weekend events; the MS Benefit Auction and the MS Tugboat Muster."
TO SEE MORE PHOTOS FROM SUNDAYS EVENTS: Here
Coming Later this fall 1 new blog, following on my now shuttered website, Maine Political Photo News & a "365" street portrait project ( probably on flickr).
Words & Photos ©2009MichaelBarriault
Posted by DoDa! at 11:37 PM No comments: 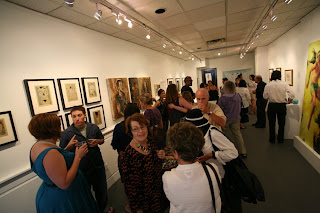 Susan Maasch Gallery got this months art walk off to a lusty start with a special thursday night preview, of it's new offering, Lust & Desire... sticky and sweet" featuring a performance by "Goldie Peacock" and a very lucky wedding cake.
This summer's 1st friday's have been much more entertaining than past years, with music, performance pieces, a circus of mimes, jugglers & fire eaters filling Congress Street. The art hasn't been bad either. This show as you might expect has it's share of skin, either bare or eluded to, in painting and photograph. 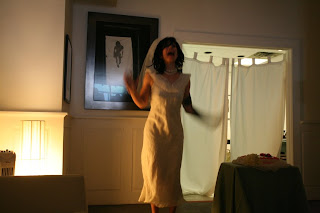 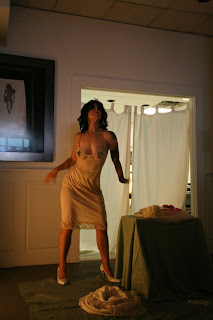 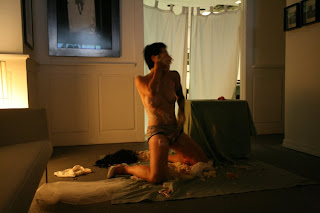 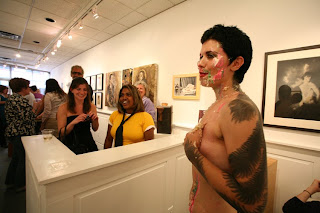 Daytrip, "Hole In The Wall" 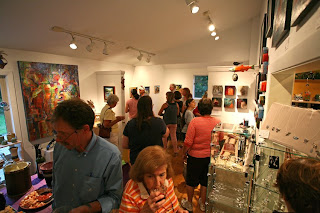 Looking for something "Artsy" to do in the Lakes Region? Try stopping into the "Hole In The Wall" gallery at 1544 Roosevelt Trail, in Raymond. Just down the road from it's larger neighbor, the "Cry Of The Loon" it holds a great selection of Maine & American handmade crafts, regional flat art & sculpture in its two rooms and sculpture garden.
The monthly openings can be pretty crowded as you can see from these pictures, but lots of fun.
It's a forty five minute drive from downtown Portland on Rte 302, on the left. Open daily in the summer & fall it scales back it's hours in the winter months. 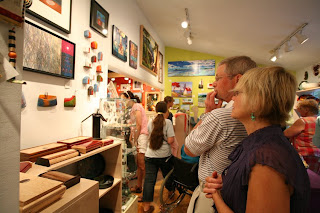 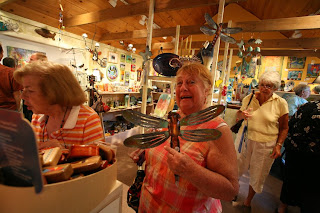 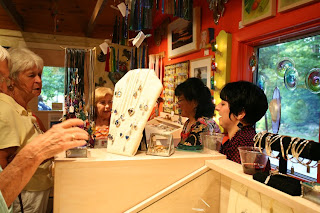 Hole In The Wall / Studioworks tel. 207-665-4952
Another fun thing to do a little farther up the road is to take a ride on the "Songo River Queen II", a replica of an 1800s Mississippi paddle wheel riverboat which operates on Long Lake, Brandy Pond and the Songo River. It docks on the causeway in Naples, where you can find a bite to eat.
Posted by DoDa! at 12:00 PM No comments: